After sixteen years of intense research and the coming and going of many casual and serious researchers the Kensington Rune Stone inscription is finally solved.  For years I was never motivated to go search for the "ten dead men" or the "two skerries" as many have prompted me to do.  I certainly didn't know they didn't exist, it just never seemed like a productive use of my time.  Now I realize these things were never real.  The realization that most of the inscription is simply allegory and code would never have come to me if I had not become initiated as a Freemason.  In fact, if I had only reached the level of a Master Mason and not pursued the higher degrees of both the Scottish Rite and the York Rite degrees it wouldn't have happened either.

I know this paper is going to stir lively debate and will likely be confusing to those who are not Freemasons.  However, I will do my best to try to clarify those with questions.  I'm sure some will try to claim the inscription was created by a York Rite Mason in the mid to late 1800's.  This will be an erroneous claim as no one in modern times could fake the many centuries-old weathering of the inscription or the Dotted R, to say nothing about the other previously unknown medieval runic and linguistic features that had not yet been discovered.  For me, this is the final nail in the case that beings everything together and answers all the important questions about the inscription.  Keep in mind this discovery doesn't change or eliminate the previous discoveries I've made with other researchers such as the "Dating Code," "Grail Code" or the meaning of the Hooked X.  In fact, this discovery brings even more clarity to these discoveries and confirms the author of the inscription was a medieval monk who was initiated in the ancient Hebrew and Egyptian mysteries.

This paper was recently submitted to a peer-reviewed Masonic journal and was published in the Rocky Mountain Mason on June 21st.  For those interested in a copy of the published article please contact Ben Williams at the following website: rockymountainmason.com

What follows is the article I submitted that the reviewers may have changed slightly.  I had not yet seen the final publication, but was assured the final version was very close to this one.  Enjoy!


The Ritual Code on the Kensington Rune Stone


This paper presents the detailed description of a recent discovery by the author he calls the, “Ritual Code on the Kensington Rune Stone.”  The existence of another new code embedded within the inscription was first realized by the author during the lecture portion of the Select Master Degree, the second of three degrees within the “Cryptic Degrees” of York Rite Freemasonry.  Skeptics of the artifact’s authenticity will no doubt claim the inscription was the work of a York Rite Freemason in the late 19th Century.  However, the geological weathering study and microscopic examination conducted by the author, a forensic geologist, independently replicated the geological findings of Professor Newton H. Winchell, who in 1909 declared the inscription genuine and not a late 19th Century hoax.   The inscription was found by both geologists to be many centuries old.  Subsequent historical, epigraphic and linguistic evidence published by the author reasonably dates the inscription to the 14th Century.  The author will demonstrate how the “Kensington Rune Stone Ritual Code” reveals that the author of the inscription was initiated in the Egyptian Mysteries of Isis and Osiris.  The author will also argue the artifact was the creation of a medieval monk, most likely Cistercian, who was formally educated in Scandinavia.  The discovery of the code provides a new framework for understanding the symbolic, allegorical, and practical aspects of the inscription.


The Kensington Rune Stone was discovered by a Swedish immigrant farmer named Olof Ohman, who was clearing trees in preparation for farming on his property in what is now near Kensington, Minnesota, in the fall of 1898.  As the tree fell, it pulled a 202-pound stone out of the ground that was tightly wrapped in its roots.  The flat tabular-shaped stone contained a twelve-line inscription carved in Scandinavian runes thought to chronicle a journey to the interior of North America in 1362.
The authenticity of the artifact has been hotly debated since its discovery.  Scandinavian linguists and runologists have generally concluded the artifact is a hoax citing it was created by a recent Scandinavian immigrant attempting to bolster their heritage.  Factual evidence to support a late 19th Century origin for the artifact has yet to materialize.

In 1909, Professor Newton H. Winchell, the first State Geologist of Minnesota, performed a geological examination of the artifact and concluded the weathering of the inscription was consistent with 500 years and it was authentic.[1]  Winchell’s conclusion was independently replicated by the author who by comparing the weathering with dated slate tombstones, concluded the weathering of the rune stone inscription was older than 200 years from the time of the discovery.  Further, the author has provided detailed historical, epigraphic, linguistic and runological evidence that shows the inscription is consistent with a late 14th century creation date and the stone likely served as a land claim.[2]


To aid the reader, a current translation of the Kensington inscription with the eight numbers (in bold) believed to be part of a “Ritual Code” is provided for reference:


12.          from this hill. Year 1362
The author has written about an event that occurred in 1926 where ten businessmen, at least eight of them being Freemasons, held a large rally near the Ohman Farm in an effort to raise $300,000 to build a 204-foot tall obelisk to house the Kensington Rune Stone.  The reasons why these Brothers felt compelled to complete such a monumental task was never been made clear.  The author will offer some new insights into their possible motives later in the paper.[3]


Native American’s and were strategically aligned.  They didn’t fight their way to the center of the continent; they must have traveled with them. 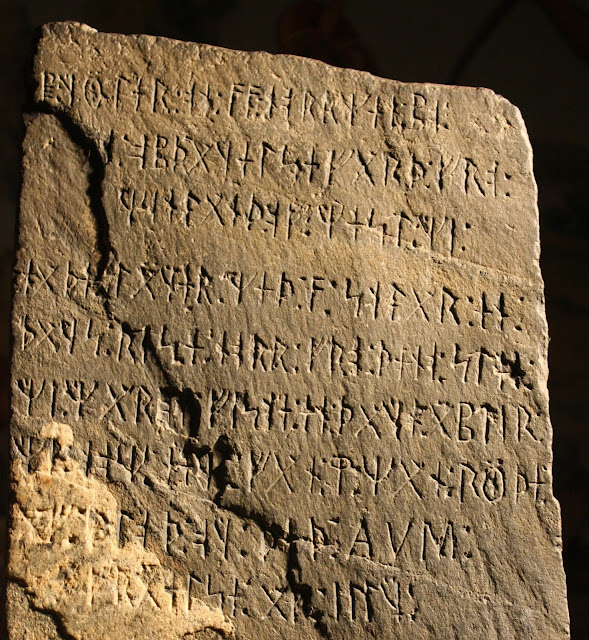 The face side of the Kensington Rune Stone that contains nine lines of text carved in Scandinavian runes. (Wolter, 2013)

The split side of the Kensington Rune Stone with three lines of text that includes the date 1362 carved using Pentadic numbers in Arabic placement. (Wolter, 2013) 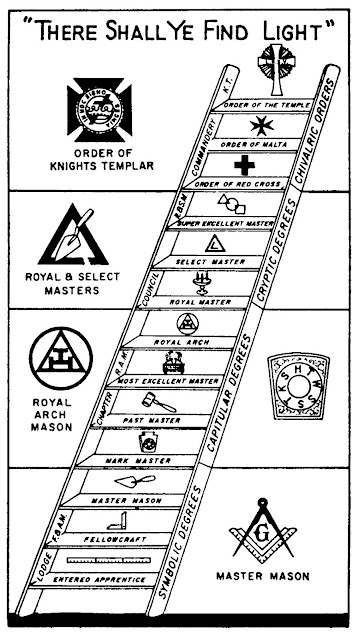 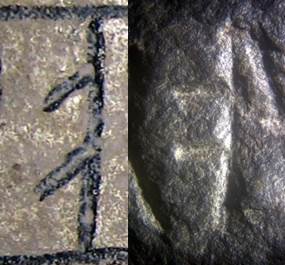 The typical “o” rune used in medieval Scandinavian runic inscriptions has two parallel lines angling down roughly forty-five and left from the main vertical stave.  On the Kensington Rune Stone seventeen of the twenty “o” runes have the two parallel lines squared at ninety degrees left of the main vertical stave.  The initiated medieval carver likely employed the concept of “squaring our actions by the square of virtue.” (Wolter, 2004, 2002)

Three of the twenty “O” runes are ornately carved vertical ovals with “n” runes inside the oval.  Two dots above the three symbols represent umlauts indicating the “ö” sound.  The Masonic concept of the “Rule of Three” appears to have been employed and could represent the three horizontals and/or three columns in the “Tree of Life” in the Kabbalah. (Wolter, 2002) 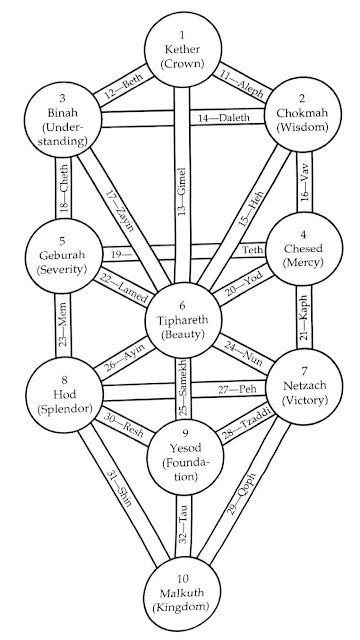 This diagram shows the ten Sefirot (spheres) and the 32 paths of the “Tree of Life” in the Kabbalah as defined by the Ari (Rabbi Yitzchak Luria), considered one of the greatest Kabbalists of all time.[11] 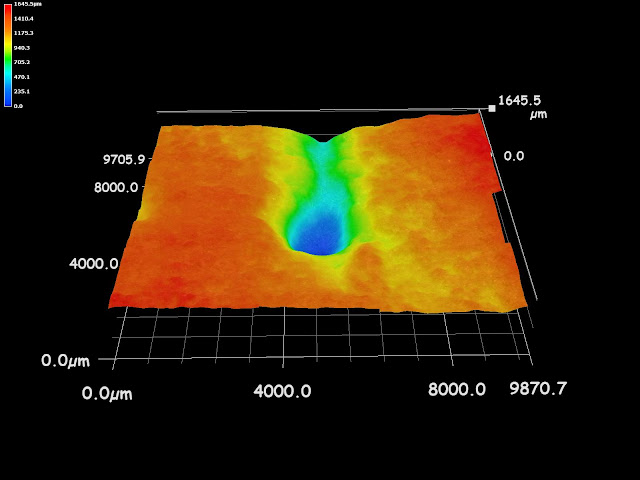 The Latin letters “AVM” are carved at the end of line eight of the Kensington Rune Stone and appear to be a coded reference to Mary Magdalene.  The carver added a punch mark to the bottom right leg of the “M” as if to add emphasis to the initiated that these letters were carved to symbolize the “other” Mary.  Three-dimensional microscopic imaging clearly shows the punch hole added to the far right leg of the “M” was deeper than the vertical line it was added to. (Wolter, 2002 and 2013) 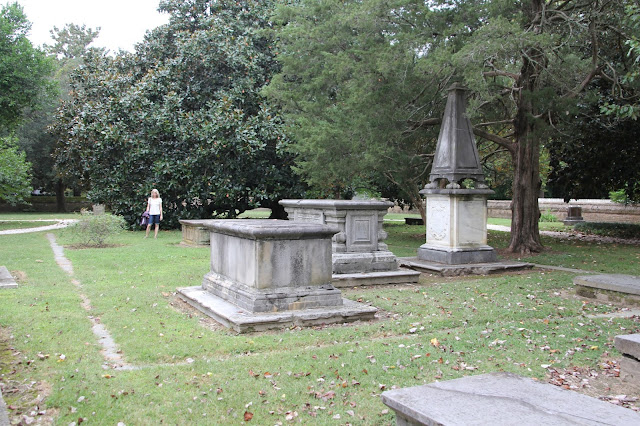 Janet Wolter stands within the original rectangular footprint within the cemetery at Bruton Parish Church in Colonial Williamsburg, On September 29, 2015.  One of the tour guides told us recent excavations did not find evidence of a secret vault below the original church.